The Minor Arcana Fives from The Shuffle Tarot 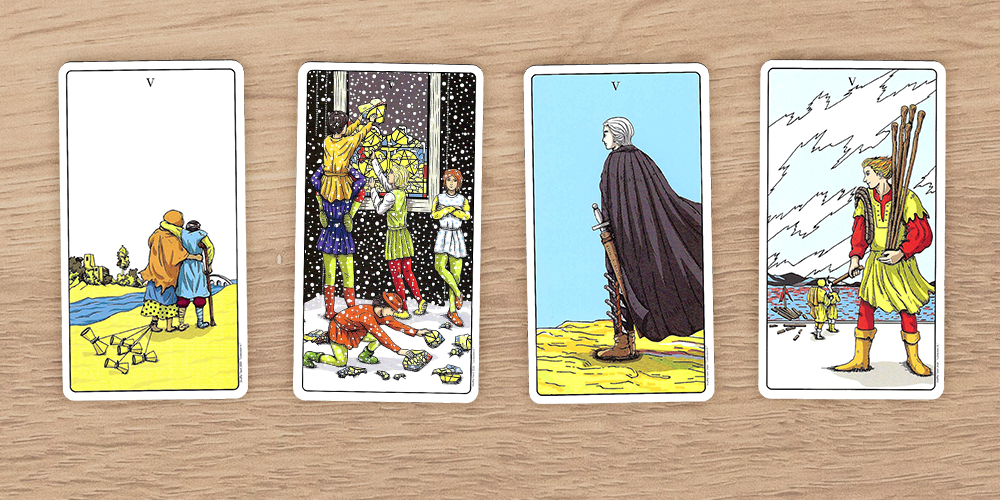 When I first saw The Shuffle Tarot on Etsy, I was fascinated enough to buy both Collection A and Collection B (the Major Arcanas are different, but the Minor Arcanas in both collections are the same).

While the accompanying guidebook is quite sparse and provides only keywords, in examining the deck, I’ve come to really appreciate it. In this post, I interpret the Minor Arcana fives.

The Shuffle Tarot‘s Five of Cups pictures the mendicants from the Rider-Waite-Smith (“RWS”) deck (here, represented through The Rider Tarot) in the RWS Five of Cups scene. Instead of walking alone, the woman now supports the man; they are now working in tandem. They are headed towards the bridge and making their way back to civilization. Their woes appear to be behind them, all of them acknowledged. Their woes are not forgotten, as they are still tied to the cups, but the two are forging a new path building on what they’ve learned.

Of course, the woman seems to be carrying both the physical burden (by allowing the man to lean on her) and emotional burden (as all five cups are tied to her leg). Yet, she will also be the one with the resources (the cups), and there is value to having company.

Here’s what the Little White Book (“LWB”) says: Dependency, Never give up, Not leaving behind, Injury, Illness, Difficulty, Partner, Moving

The youths from the RWS Five of Wands appear in The Shuffle Tarot‘s Five of Pentacles. Most of them seem to acknowledge that their conflicts / competitiveness has resulted in tangible damage to a sanctuary / safe place. Four of them work together to repair the damage.

Yet, one youth stands to the side, arms crossed, refusing to help. In this process of reconciliation, is there one holding out? Is that person you?

The man has had a chance to mourn. Although he no longer mourns, he has not fully recovered from past trauma. Armed with knowledge, he appears to contemplate revenge.

Or perhaps, he refuses to mourn and give in to his feelings (gone are all the bodies of water), choosing to plot revenge. Yet, that is simply another trap to stay stuck in the past, instead of moving forward and healing.

LWB says: Being hidden, Having a secret, Being unknown, Being revealed, Keeping thinking, Preparation, Agility, Having experience

The RWS Five of Swords has been substituted with wands in The Shuffle Tarot.

I like the ambiguity of this card. Is the man in the foreground ready to help those in need, bringing extra planks, rope, and a hammer, or is he the culprit who wrecked their raft with a hammer, absconding with some planks and rope?

The latter would probably be more in line with both the RWS Five of Swords and RWS Five of Wands. Perhaps some friendly competition escalated too quickly, resulting in relationships that may be beyond repair.

On the other hand, the wands don’t resemble the planks at all, so maybe he is here to help.

The Shuffle Tarot shuffles the characters, landscape, and suits from the traditional RWS images. That sounds a bit gimmicky, but in practice, I had to think more about what the cards and people represent, and I really enjoyed the practice. I’m loving the deck far more than I thought I would.