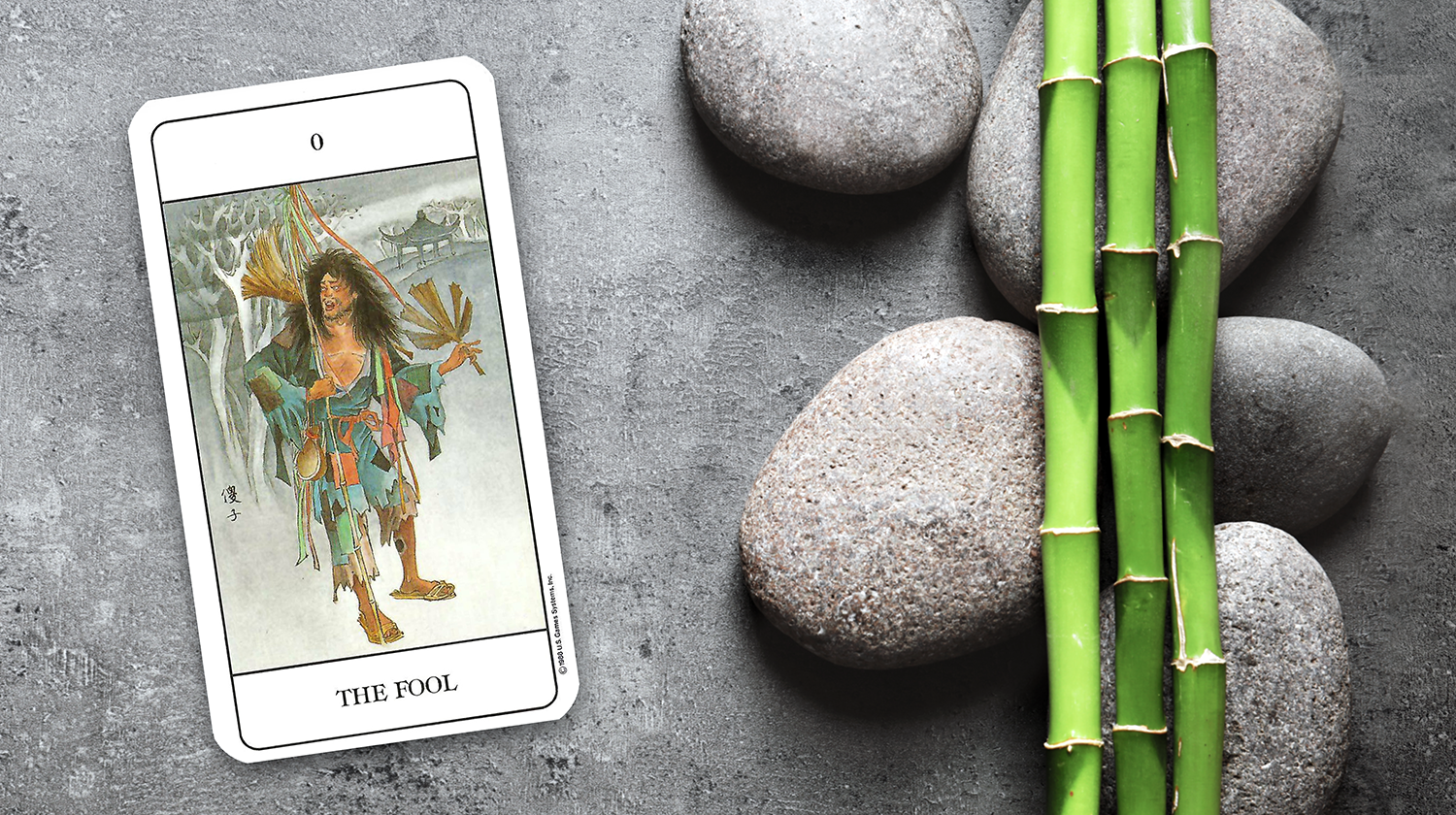 I have owned and loved Jui Guoliang’s The Chinese Tarot Deck, as published by U.S. Games System, since 1998, though admittedly more as an art appreciation deck than a reading deck. I am Chinese-American, more American than Chinese, but certainly more Chinese than most Americans. In perusing the Chinese Tarot deck more recently, I decided I wanted to get more in touch with my Chinese roots and use the deck to help me not only study tarot, but also Chinese culture in general.

Clues from the Little White Book

The Little White Book (“LWB”) accompanying the deck gives very little information on the cards. As it goes with pretty much all decks that only have a sparsely written LWB, I would much prefer a more in-depth book. It doesn’t have to be, perhaps, as in-depth as Patrick Valenza’s Deviant Moon Tarot book, which provides not only additional card meanings but also his artistic process; something more akin to Yoshi Yoshitani’s Beneath the Moon would suffice. Of course, all the better if the book was included in the deck, like my all-time favorite, Lunaea Weatherstone’s Your Path Through the Enchanted Forest. Perhaps in future editions?

The LWB has this to say about The Fool:

The Fool, in China, is seen as kind and comic, but is also considered a kind and honorable person.

In other words, pretty similar to U.S. Games’s standard Rider-Waite-Smith (“RWS”) LWB text. I’m not sure this matches well with this specific card, though I’m not a fan of these keywords for any Fool card, I suppose. I generally read the Fool as new beginnings, new journeys, possibilities, freedom, marching to the beat of your own drum (in a mostly positive way), etc.

I found a couple blog posts out there that discuss some of the cards in this deck, one by the inimitable Benebell Wen, one by Mee Tarot, and one Livejournal entry by someone named Lucy. I found these posts helpful, but I still wanted to dive deeper into each card.

Does “The Fool” Represent a Specific Person?

The Fool card, as with all other cards in the Chinese Tarot deck, also contain Chinese characters as part of the artwork. Here, the Chinese is straightforward: 傻子, “the fool.” Elsewhere, the Chinese characters do identify specific individuals or deities where they are pictured (e.g., The Moon, The Sun, The Universe), or the LWB provides the identification (e.g., Heavenly Master identified as Chang Tao Ling) so this leads me to believe that The Fool card depicts an archetype rather than someone specific.

I do not believe that there are enough symbols here that would point to someone specific pictured as the Fool, either. Livejournalist Lucy noted that the shabby fan reminded her of Ji Gong (not that the Fool is Ji Gong), and that observation is spot-on. Since Ji Gong is a monk and is usually depicted wearing monk robes, or at least with monk beads, I don’t think this is actually Ji Gong. That said, I do think there’s a reason to depict a fan. The sorry state of the fan befits the beggarly look of this Fool, and the significance of the fan may be one that’s hinted at in the LWB: that the fool archetype is known to be kind. Fan (扇, shàn) and kindness (善, shàn) are homonyms, and the Chinese love employing homonyms to make a point.

While this card may not picture someone specific, it may still be helpful to take note of one of the most famous “fools” of Chinese folklore.

The tale I am referring to is “Foolish Old Man Removes the Mountains” (愚公移山), where an old man decides to move an inconvenient mountain piece by little piece through an arduous journey. When his task was challenged by those who would deem him a fool, the old man explained that while he may not accomplish the move in his own lifetime, if his descendants were to continue this task, the mountain would eventually be removed (and was removed by gods who were impressed with the old man’s perseverance). This tale is usually referenced in regards to someone’s indomitable will. While this Fool (傻子) is not Yu Gong (愚公), I do like extracting this idea from Yu Gong’s story to apply it to this card:

We are all short-sighted in some way; what may look foolish now may in fact result in great changes much later. Even if there appears that the journey on which you are about to embark will bear obvious fruit, it does not mean it will be made in vain.

There are some indications of a journey, with a pavilion in the back providing only a temporary rest stop, but it’s not clear in which direction this Fool will travel. Will it be to the right, as his body is facing, or to the left, in the direction which he is looking? Ahead, or behind, where the pavilion stands? The lack of a clear precipice and direction of travel seems to suggest that everything is a possibility. The budding leaves on the tree indicate that we’re in the Spring, the beginning of a journey, but it’s also clear that this Fool has been on other journeys for awhile, with the shabby state of his clothes, shoes, and shin sore.

His walking stick is a bamboo stick…I hesitate to read too much into this because the use of bamboo sticks is pretty ubiquitous (and what would a Chinese person use for a stick but bamboo?), but it may be significant that the heart of the bamboo is known for being hollow, which resonates with the “0” designation of this card.

This Fool is also older than the RWS Fool. The colorful streamers coming down from the Fool’s walking stick seem to indicate that while he may be older, he’s still young at heart, and/or still see the joy in things, even when it seems like he has so little and has probably witnessed quite a few things on the road. His age called to mind the following quote from Lin Yutang, from his 1937 book, The Importance of Living:

Speaking as a Chinese, I do not think that any civilization can be called complete until it has progressed from sophistication to unsophistication, and made a conscious return to simplicity of thinking and living, and I call no man wise until he has made the progress from the wisdom of knowledge to the wisdom of foolishness, and become a laughing philosopher, feeling first life’s tragedy and then life’s comedy. For we must weep before we can laugh. Out of sadness comes the awakening and out of the awakening comes the laughter of the philosopher, with kindliness and tolerance to boot.

I love the idea that while we all start out as Fools, but to attain philosophical enlightenment, that we must become the Fool again towards the end of our journey…which happens to be in line with many interpretations of “The Fool” card.

Why Sacrifice Iphigeneia? Musings on The Songs of the Kings by Barry Unsworth

The Minor Arcana Fives from The Shuffle Tarot