Why Sacrifice Iphigeneia? Musings on The Songs of the Kings by Barry Unsworth 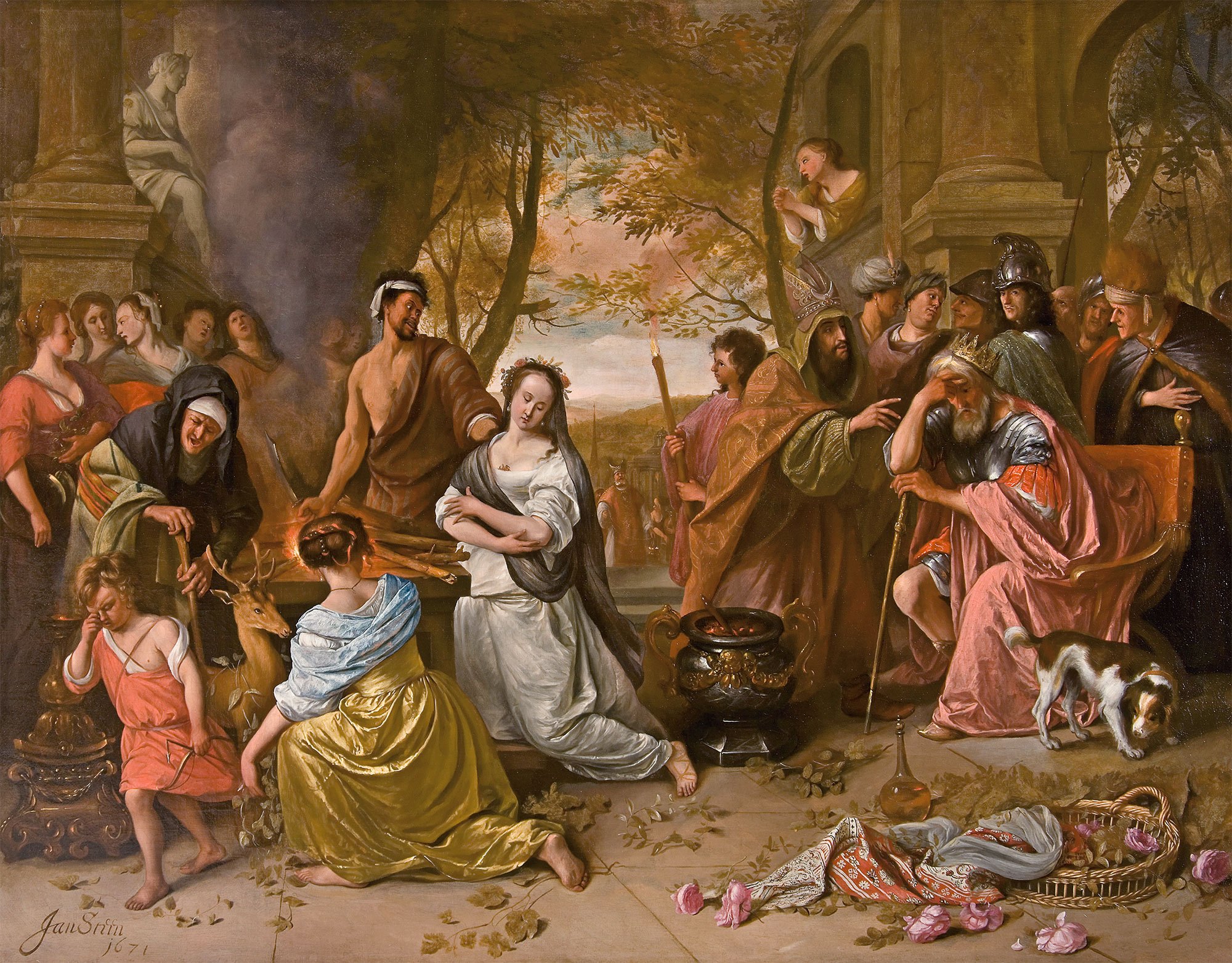 Quite a few modern retellings reimagine the Trojan War, but few seem to dwell on Iphigenia’s—or spelled here as Iphigeneia’s—sacrifice. I was quite excited, then, to read Barry Unsworth’s take on the tale, originally published in 2002.

But I could not figure out why, in this version of the tale, Iphigeneia had to be sacrificed.

As promised on the back cover of the 2017 Anchor Books paperback edition:

A brilliant retelling of an ancient myth, The Songs of the Kings offers up a different narrative of the Trojan War, one devoid of honor, wherein the mission to rescue Helen is a pretext for plundering Troy of its treasures. As the ships of the Greek fleet find themselves stalled in the straits at Aulis, waiting vainly for the gods to deliver more favorable winds, Odysseus cynically advances a call for the sacrifice of Agamemnon’s daughter, Calchas the diviner interprets events for the reader, and a Homer-like figure called the Singer is persuaded to proclaim a tale of a just war to hide the corrupt motivations of those in power. But couched within the Singer’s spin is a message at once timely and timeless: “There is always another story. But it is the stories told by the strong, the songs of kings, that are believed in the end.”

Many reviewers have noted parallels between The Songs of the Kings and the Iraq War, Unsworth’s Agamemnon and George W. Bush. In looking at the blurb, sure, there’s a case to be made that “Weapons of Mass Destruction” was pretext for the Iraq War, much as Helen was a pretext for the Trojan War. Menelaus brays incessantly about the “Asians,” and at one point says:

Now it is true that the Trojans are Asians, but they can’t help that, can they? Most of them have never had a chance to be anything else. I mean, there they are, they are stuck with it. They are kept in ignorance and superstition, they live in the midst of squalor and bad smells, they are unhygienic, they have the wrong gods. Now we could save them from that, we could bring light into their darkness. I mean, we are streets ahead of them, especially in metalwork and catapults. We have a duty towards these people. Once the territory has been occupied and the troublemakers rounded up—I don’t believe in leniency towards those responsible for the war, I have every intention of personally hanging Paris up by his balls—we could set about civilizing the population and changing their ways. Nothing must be allowed to get in the way of this.

But, I’m still scratching my head over how the Iphigeneia-at-Aulis tale fits into this bigger message.

The Why Is Never Fully Explained

In crafting this setup, Unsworth seems to neglect some of the story aspects of the novel. For one, it is never made clear why Odysseus needed to convince Agamemnon that Iphigeneia needed to be sacrificed—other than that is what the plot required.

Unsworth’s Odysseus is eager for the Trojan War:

This Trojan campaign would change everything of course. From lordship of a few barren acres to an empire in the lands of gold, the fertile East.

Yet, the ragtag band of Myceneans waiting for favorable winds are getting impatient. Fights are breaking out, and the men could be disbanded before they even set sail. So understandably, something must hold the men together.

But why must that something be Iphigeneia’s sacrifice?

No Message from the Gods Here

In Euripides’s Iphigenia at Aulis, Calchas declared that Iphigenia must be sacrificed to appease Artemis. In The Songs of the Kings, Calchas announced no such prophecy. Instead, a competing priest of Zeus, Croton, fabricates the reason for the sacrifice, as part of a conspiracy with Odysseus. Iphigeneia, Croton proposed, offended Zeus by worshipping Artemis as an equal god, perhaps even above Zeus.

While this is an interesting way of showing how differences in otherwise similar religions can be used to incite violence, without true belief that sacrifice is necessary to bring about favorable winds, why would Odysseus suggest it? What happens when Iphigeneia is sacrificed, and the unfavorable winds continue?

Yes, the men need some cause for unity and patience, but the suggestion of the sacrifice of Agamemnon’s daughter is also a very specific one. Why not help the Ajaxes perfect their idea of their proto-Olympic games? Surely wily Odysseus could figure out a way to convince the men of the prestige associated with the proposed games.

No Basis Exists for a Vengeful Motive, Either

Is Odysseus obsessed with sacrificing Iphigeneia because Agamemnon (through Palamedes) put infant Telemachus’s life at stake when Odysseus feigned madness, and thus Odysseus had to return the favor by threatening Agamemnon’s firstborn? Yet, Odysseus did not feign madness in this version of the tale:

Odysseus detested [Palamedes] because of a malicious story he had put about, one which still found its way into the Songs, that the Ithacan had tried to dodge the war by feigning madness, yoking a horse to an ox and attempting to plow with them. For this slander, he had sworn to kill Palamedes one day.

And while human sacrifice is not unprecedented (as with the Minotaur), it did not appear to be common enough practice such that it would suggest itself as a potential or even reasonable enough solution, especially where there are no “true” (at least, believed) prophetic words to back them up.

An Interesting Book That Fails at Its Foundation

While The Songs of the Kings made some great points about war propaganda, it would have been a much stronger book if it had laid a better foundation in explaining why Odysseus landed on “sacrificing Iphigeneia” as his game plan.